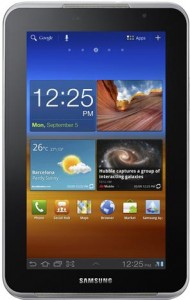 Samsung released its Galaxy Tab 7.0N phone and is now available in Germany. The phone includes a contoured edge that wrapped onto the front of the device, and a more prominent placing of their logo. Samsung released the phone in response to Apple’s last year injunction that has not allowed Samsung from selling the Galaxy Tab in Germany.

The tablet’s innards appear similar to the Galaxy Tab 7.0 Plus will be shipping in the rest of the world, including an upgraded LCD panel, and Android Honeycomb 3.2. The tablet will be available in Germany in white or silver colour later this month.