With Samsung’s Galaxy S3 no longer expected to make a showing at upcoming Mobile World Congress 2012 later this month, Frandroid just received an invitation from Samsung for an event on Thursday, March 22, 2012 – three weeks reportedly after the Mobile World Congress. If we go by earlier leaks, the new phone will feature a 4.6-inch 720p Super AMOLED Plus display, a 1.8GHz dual-core Exynos processor, 2GB of RAM, and a 12-megapixel camera.

Earlier, according to ETNews, Samsung’s upcoming and most awaited Galaxy version – Samsung Galaxy S3 is set to measure just 7mm, Android 4.0 Ice Cream Sandwich, AMOLED Plus had adopted the display, 8-megapixel front-facing and 2-megapixel front-facing camera, and is expected to ship with support for LTE networks, HDMI port, and quad-core processor. 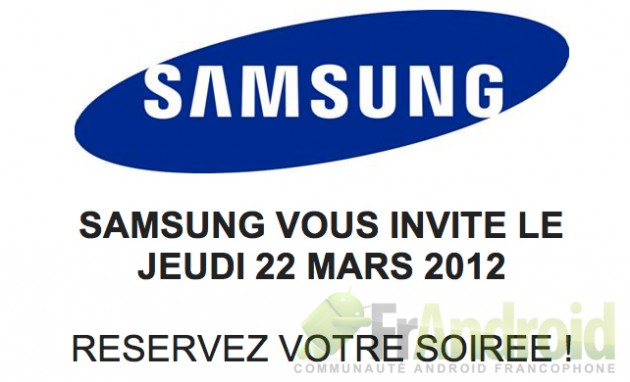