According to the latest research from Strategic Analytics, Samsung Galaxy S III topping all the chart with the best its overtook Apple’s iPhone 4S, resulting in becoming the world’s best selling smartphone model in the third quarter 2012. The figure states that Galaxy S III having the total turnaround of 18 million units in third quarter, compared to 16.2 million iPhone 4S units sold in the quarter. 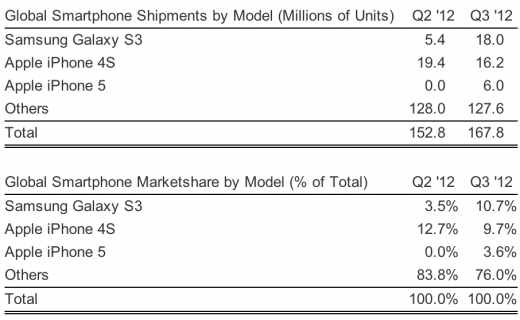 Neil Shah, Senior Analyst at Strategy Analytics, said, “Samsung’s Galaxy S3 smartphone model shipped 18.0 million units worldwide during the third quarter of 2012. The Galaxy S3 captured an impressive 11 percent share of all smartphones shipped globally and it has become the world’s best-selling smartphone model for the first time ever. Apple shipped an estimated 16.2 million iPhone 4S units worldwide for second place, as consumers temporarily held off purchases in anticipation of a widely expected iPhone 5 upgrade at the end of the quarter.”