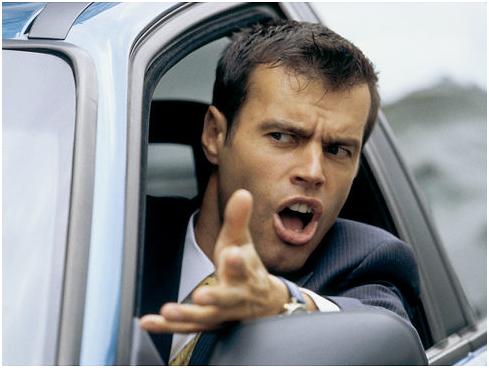 Bad drivers can be infuriating. At times, the road seems to be full of them. How you deal with them can equally how good or bad a driver you are. Road rage shouldn’t be the answer. Instead, try a few of these methods.

Responding to an aggressive driver with equal aggression will only up the danger in most cases. Beeping your horn when a car pulls in front of you at a roundabout or flashing your lights at a car that doesn’t have its headlamps on are suitable enough responses, as you’re helping to notify a driver who is unaware of their actions. However, if someone keeps trying to race you on a motorway or is beeping their horn at you at a traffic jam, the appropriate response is not to race them back or throw a middle finger in return. The aggressive driver may already be driving recklessly due to being blinded by anger, and this could just spur the driver to act more dangerously.

If someone is swerving across lanes up ahead of you or on their phone, keep a wide berth. Don’t try to overtake them unless you have the space – they may respond by panicking and causing an accident. Similarly you should avoid tailgating slow drivers – whilst the urge may be to try and get them to speed up, you don’t want to risk colliding with their bumper if they decide to do an emergency stop.

On the topic of tailgaters, it’s important not to let them bully you if you’re the one being pressurised (especially if they’re urging you to go faster and you’re already at the speed limit). Pull over or head into the inside lane so that they can pass, but make sure you react slowly so that they don’t head straight into the back of you.

Know when to take legal action

If a driver is behaving recklessly and putting others in danger, you have right to seek legal action. Obviously if you are involved in a crash, you should consider such action – you may be eligible for a personal injury attorney if they’ve caused you personal harm.

For other occasions where you may simply witness dangerous driving, get a passenger to record their number plate and notify the authorities. This may include anything from excessive speeding to illegal parking.

Having a dashcam can be a useful tool for recording evidence that can be used when making an insurance claim, personal injury claim or notifying police. These cameras record everything in front of you that you can see out your windscreen. You should avoid chasing dangerous drivers who may have cut you up though – this may shatter any chance of a claim or statement having an effect, as it will prove that you too were driving dangerously.