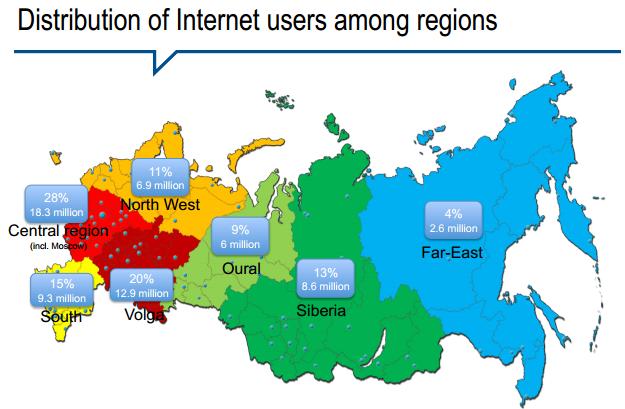 According to the Russia’s Public Opinion Foundation (FOM) quarterly report (via The Next Web), in the early 2013, around 50.1 million Russians aged 18 and older used the web on a daily basis, an increase of 11.6% over the previous year, which is 43% of the total population.

The FOM found that the monthly unique users has reached 64.4 million while it’s good to count on the fact that just 11% of Russian Internet users live in country’s capital Moscow, 4% in St. Petersburg and the 9% live in cities with having over 1 million inhabitants.

Further what makes the country an Internet rising place because an average internet users annual growth exceeding 10% over the past few years as well as back in September 2011, the country give an edge to Germany and overtook it as the market with highest unique internet users in Europe.

FOM report is the result of surveys conducted during the winter of 2012-13 among a sample of 30,000 respondents based in 205 urban and rural areas. To check the complete report, click here.