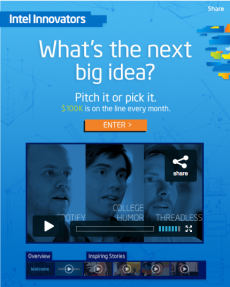 Intel has teamed up with NCIIA to offer young entrepreneurs an opportunity to take home a whooping amount of $100,000 for their technology idea. The company has launched “Intel Innovators” – Intel built up the platform with their Facebook community allowing young entrepreneurs (of age group mainly 18 to 24 year olds in U.S.) to share their business ideas.

This new Intel’s Facebook community and nationwide competition was created to discover, empower and award the next generation of innovator. Along with the prize money, the winners will be invited to participate in NCIIA’s immersive training program, VentureLab, where they will be taught and make them learn the ways by which they will identify their potential markets for their innovations and create valuable connections with industry professionals.

“Few companies are more passionate about technology and innovation than Intel. We never fail to be impressed by the power of the human imagination or the millions of young people who are fueling the future with their amazing ideas. They inspire us. And through Intel Innovators, we hope to empower them” stated as the reason that why Intel created Intel Innovators.

Intel is currently accepting the submissions for Round 3 through January 16, 2012.

Do you have the next big idea – than what you are waiting for? Applications can be made through here.

Intel Corporation is an American multinational semiconductor chip maker corporation headquartered in Santa Clara, California, United States and the world’s largest semiconductor chip maker. It is the inventor of the x86 series of microprocessors, the processors found in most personal computers. Intel Corporation, founded on July 18, 1968, is a portmanteau of Integrated Electronics (though a common misconception is that “Intel” is from the word intelligence).