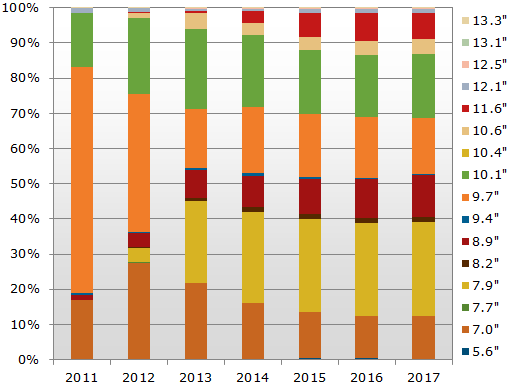 According to NPD DisplaySearch Quarterly Mobile PC Shipment and Forecast Report, the tablet PC shipments are expected to reach more than 240 million units worldwide in 2013, exceeding the 207 million notebook PCs which are projected to ship. With accordance in time, the tablet market has been led by Apple’s 9.7-inch iPad, but in 2013 a small tablets market will boom it up over the market.

“Tablet PCs with 7-8” screen sizes are expected to account for 45%, or 108 million units of the market in 2013, overtaking the 9.7” size which will account for 17% share or about 41 million units,” notes NPD. On the other end, Notebook PC shipments have been slowed by declining demand globally, reaching even emerging markets where low penetration rates could have stimulated demand.