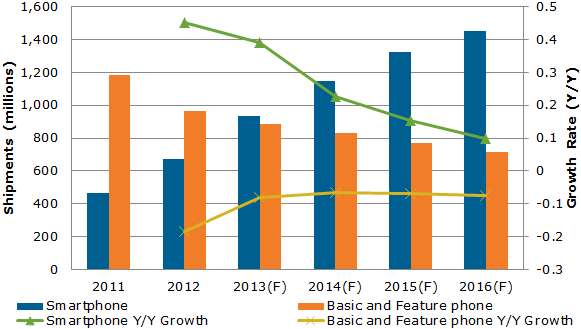 The report further suggests that in emerging markets, smartphones will drive the maximum growth as the large numbers of devices are upgraded to 3G and 4G networks. China leads in the entry-level smartphone category, comprising 55% of shipments while the Asia-Pacific region will account for over 50% of smartphone shipments in 2013.

LTE-enabled smartphones will reach 23% market share in 2013, while shipments of AMOLED and LTPS LCD panels for full high-definition (FHD) resolution smartphones are forecast to increase significantly, from 1.7 million units in 2012 to 113 million units in 2013. In 2013, it is also expected that over half of smartphone display will range between 4 to 5-inch while screens larger than 5-inch will grow to 16% of the market.