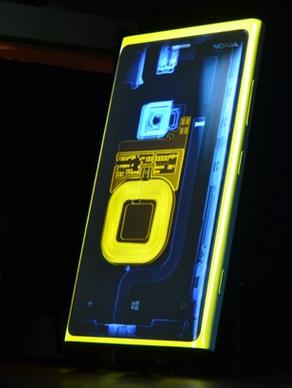 As expected, Nokia just announced the Lumia 920 claiming it as “the most innovative smartphone in the world.” The phone features 1.5GHz dual core processor, a slightly larger 4.5-inch display, and the new Windows Phone 8 operating system. The new Lumia will come in “vibrant colors,” the yellow, red, white, grey, and black. The company also added wireless charging for the Lumia 920, as well as “PureView” camera technology. The phone includes an 8-megapixel unit with a Carl Zeiss lens, bearing Nokia’s PureView branding and features a new, “floating lens” optical image stabilization system and the ability to record 1080p HD video.

The phone contains Nokia PureView HD technology- the “most immersive viewing experience on any smartphone,” says Jo Harlow, Executive Vice President. PureView tech in the Nokia 920 captures up 20 times as much light as normal sensors. The Lumia 920 will bring together location-based apps to create a suite of location services. The phone also features optimized sunlight readability, to help generate brighter and clearer displays “that can be viewed even in the desert.”