Whenever you sit on the internet, the first thing we do is to open your web browser. Whether it’s Internet Explorer, Opera, Firefox, Chrome or Safari, the browser is one such important software or app that we use almost daily. Have you ever wondered why and how the browsers get its name? 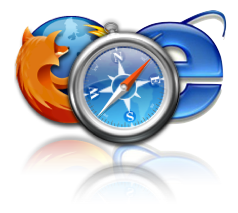 Microsoft’s web developer, Martin Beeby, has put together a wonderful history of web browser names. Starting with Internet Explorer get its name – Explorer was chosen to convey the freedom and possibilities opened up by the Web. When you look back to 1995, having a name that gave people a clear idea of what the product did was probably a good idea.

Mozilla, was used for some time as an internal codename for Netscape Navigator, the name was actually the brainchild of Jamie Zawinski. Mozilla is also a combination of “Mosaic Killer”, which neatly summed up their mission at the time. Opera is having an interesting history, the name was chosen by keeping the “Opera” around the world in mind plus Opera stands for quality and high standards.

Chrome, was first a codename voted early in Chrome’s development, but later it’s said by Glen Murphy chosen Chrome because one of the design leads liked fast cars. Perhaps, moving towards the Firefox, that wasn’t called at first by this name. It was originally called as Phoenix, which than changes to Firebird, and finally choosing Firefox as its final name.