The ongoing patent spat between Motorola and Apple has reached an interesting twist – Motorola has offered to end the patent dispute and license its wireless patents to Apple – in exchange for 2.25 percent of Apple’s sales. Recently German court granted an injunction against sales of many of Apple’s 3G-bearing products, including older model iPhones and the iPad. That injunction held for less than a day, however, pending further review of Motorola’s claims against Apple. 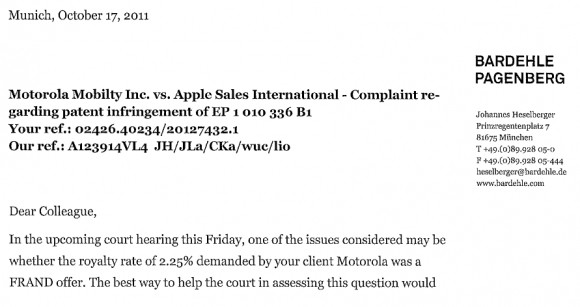 According to a court filing, the handset maker is asking for 2.25 percent of Apple sales in return for the license, though it remains unclear whether this pertains to sales of all products or, more likely, the 3G-enabled devices under consideration in court. In either case, the company would stand out to see a bit 2.25 percent shakedown excessive in its kitty.

Considering that Apple’s iPhone sales have totalled about $93 billion since 2007 – under Motorola’s request, the company would have made about $2.1 billion from these sales alone.  Meanwhile, the iPhone maker has filed motions to access Motorola’s licensing agreements with Nokia, HTC and other manufacturers, in the hopes of exposing a double standard.