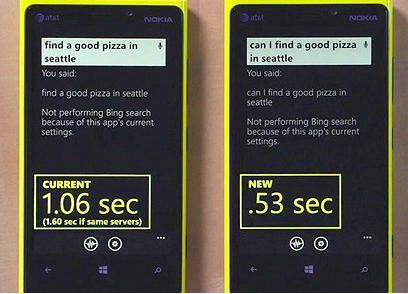 Microsoft today announced that it has updated Bing’s Voice Search for Windows Phone 8 which now in turn will return twice as fast results as compared to before and has improved accuracy by 15%. The tech giant says that these improvement bought together by Bing and Microsoft Research teams’ work with Deep Neural Networks (DNNs).

“Interestingly, the researchers also have discovered that DNNs can learn across languages,” Microsoft Research suggests. “This is of critical importance, because speech recognizers must be trained on huge amounts of example speech data—thousands of hours of it—and the burden of transcribing such voluminous files can be reduced significantly when data from one language can help improve accuracy for another.”

“This is only the beginning of Bing’s work to improve speech and voice capabilities across Microsoft devices and services, and you can expect more from us in the future,” Microsoft said. “In the meantime, start talking to Bing on your Windows Phones and let us know what you think about the improvements. You won’t be disappointed.”