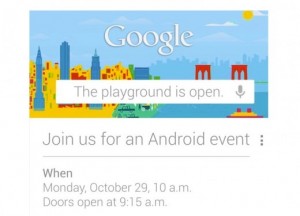 With the big event on the way surpassed by rumors already hit above the shelves, the LG’s executive Amit Gujral, of Mobile Product Planning for LG’s India division stated that the company will unveiled LG’s Nexus smartphone on October 29th, reports IBNLive. “Google will unveil the LG Nexus on October 29 and the phone will be available in the Indian markets by the end of November,” Gujral reportedly said. Along with this, Gujral also confirmed that the smartphone will features a 4.7-inch display, 1.5GHz quad-core processor and Android 4.2 while the other details are still under the box. Well, we will be covering live the event, so stay tuned with us and will bring updates for you.