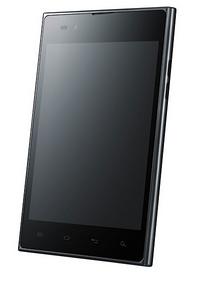 Adding more glitters to the LG recently released teaser of its 5-inch screen, 4:3 aspect ratio “Optimus Vu” Android smartphone – the company unveiled the LTE device, ahead of the Mobile World congress, which offers a unique combination of tablet-like viewing with a smartphone portability – the phone runs on a powerful 1.5GHz dual-core processor, 32GB internal memory and a 2,080 mAh battery.

The device has a huge 5″ IPS, 1024x768p display, making it as big as the just released competitors Samsung Galaxy Note – the phone on other end is just only 8.5mm, is the slimmest among all LTE phones currently on the market and is perfectly suited for a hand and file completely comfortably in a jacket pocket.