According to a report from market intelligence firm IHS iSuppli, LG Display is the leader by a wide margin of the tablet display market, with a 51 percent share of global unit shipments in the second quarter of 2011. The company is well ahead of South Korean rival Samsung at a distant second with a 35 percent share. Third-place Taiwan’s Chimei Innolux, which is another Apple supplier that also provides for the Chinese white-box market, controls a 9 percent share. The remaining 5 percent of the tablet display market is split among several smaller firms. 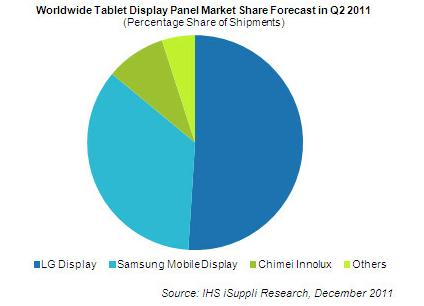