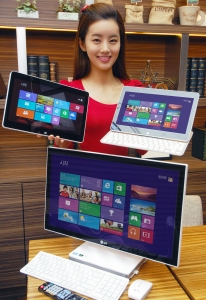 LG today officially announced the H160 sliding tablet and V325 multitouch all-in-one, both running on Windows 8. The H160 features a built-in tablet; an 11.6-inch IPS display of resolution unknown till now with weighs just over 2.3 lbs and is 15.9mm (0.63 inches) thick. It also offers USB, HDMI, and microSD ports with 10 hours of battery life.

The V325 all-in-one features a 23-inch 1080p multitouch display, Ivy Bridge Core i5 processor and NVIDIA GeForce GT 640M graphics card and having built-in tuner and functions as a TV when the PC is switched off.  Both tablet and all-in-one will be out in Korea on October 26th coincidentally the same when Microsoft’s Windows 8 will make debut.