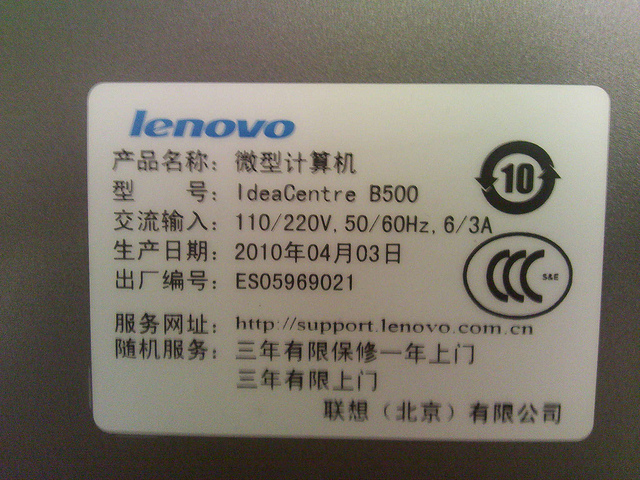 The technology market has been extremely competitive throughout the last few years. Each company works hard to produce new devices that will fly off the shelves. But when it comes to computing devices, Lenovo is the company that has prevailed in the PC industry.

According to market researchers International Data Corporation (IDC) and Gartner, Lenovo has surpassed Hewlett-Packard (HP) and currently reigns as the largest PC supplier in the world.

Lenovo reached 16.7 percent global PC market share from April to June in 2013. HP was close behind with 16.4 percent market share, according to IDC.

Moving up in FORTUNE

The PC giant recently announced that it ranks as No. 329 in FORTUNE’s 2013 list of the world’s largest companies by revenue, according to The Wall Street Journal. Lenovo moved up from No. 370 on the 2012 list. The company is currently generating $34 billion in U.S. annual revenue. This is the third consecutive year that Lenovo has improved its position on the FORTUNE Global 500 list.

The improvement in ranking illustrates how successful Lenovo has been the last year. According to The Wall Street Journal, Lenovo reported $34 billion in annual U.S. revenue for the full year ending March 31, 2013. The company also reached a record 15.5 percent market share in PCs worldwide.

Lenovo has also had much success globally. According to IDC, Lenovo multiplied its PC Plus offerings worldwide and became the third largest maker of Smart Connected Devices in the world.

Bringing Opportunities to the United States

Since Lenovo is working hard to boost its brand and U.S. market share, the company recently opened its first U.S. manufacturing plant. The assembly plant was opened on June 5, 2013 in Whitsett, North Carolina. According to NPR, the plant currently employs 155 workers who assemble desktops and notebooks using components from overseas.

Much of Lenovo’s success in the PC industry has been accredited to its sale of tablets. Industry analysts have said for several years that tablets will soon become more popular than tablets. It looks like that day has come.

According to PC Mag, IDC predicted that tablet shipments will grow 58.7 percent year over year in 2013. Shipments will reach an estimated 229.3 million units, up from 144.5 million in 2012. The market research firm expects the PC market to see negative growth for the second year in a row. Tablet shipments are predicted to outpace laptop shipments this year and then surpass the entire PC market by 2015.

Even with the PC market declining, Lenovo is still finding ways to stay ahead of the competition. As a result of the company’s innovation and selection of tablets available, Lenovo has secured the title of the largest PC supplier in the world.

About the Author
Jennifer Thayer

Jennifer Thayer is a technology writer from Southern California. She is passionate about exploring new ways technology can be used to make day-to-day tasks easier. Follow her on Twitter to see what she comes up with next.