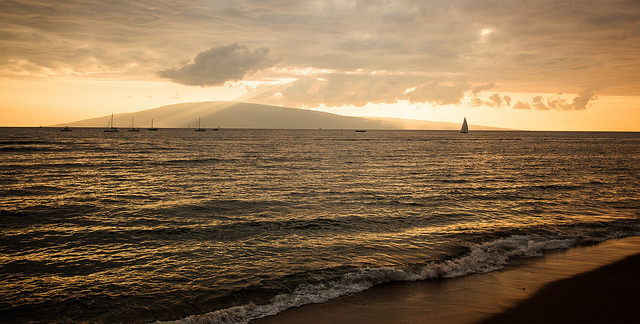 Honolulu is probably the best known Hawaiian area for a vacation to these tropical Pacific islands. And Lahaina is a close second. There are many reasons why:

Located on the west coast of the island of Maui, Lahaina began its life as a busy whaling town.  Commemorating those beginnings, today you can visit the popular Whalers Village Museum, an enjoyable and educational exhibit on whales and the centuries-old whaling industry.

Following the same theme, be sure to explore the over 60 shops in Whaler’s Village. This is the only shopping mall on Maui that fronts the ocean.

In the Hawaiian language the name “Lahaina” translates to “merciless sun.” Not that the sun here is especially hot, but this refers to the fact that unlike other areas of the Hawaiian Islands, Lahaina’s annual rainfall averages less than 13 inches.

Most of Lahaina’s rain occurs during the winter months of December and January. Don’t let that stop you from enjoying a vacation here during this off-season time. If you do find yourself in rain, you’ll discover that tropical rain is soft, warm, and almost musical.

When the Hawaiian Islands were unified, Lahaina served as the Royal Capital of the Hawaiian Kingdom from 1820 through 1845. This was due to the fact that King Kamehameha III did not care for bustling Honolulu, and instead enjoyed the peace and quiet of the small village of Lahaina.  In fact, this royal sovereign built a palace for his getaway near the middle of town, in the center of a fishpond on a one-acre island..

What has become the largest banyan tree in the world was planted in Courthouse Square in 1873. Spanning almost three-quarters of an acre, this massive tree sports twelve major trunks.  The incredible symphony of screeching Mynah birds is heard here every evening at sunset as the birds settle down on the spreading branches to roost for the night.

Courthouse Square, also known as Banyan Tree Park, is actually where Old Fort Lahaina was built in 1831. All that is left of the fort today are stone wall ruins. However, its history is worthy of a look. The reason the fort was built was due to the village being lobbed with cannonballs when foreign sailors became angered at the new law that forbade Hawaiian women from swimming out to the ships.

After that one incident there was really no need for a fort, and the fort was mainly used as a prison. In 1854 it was demolished so the stones could be used to build the new prison (Hale Paahao), and a court house was built on the site.

The charming old court house, located in the center of Lahaina, is now home to the Lahaina Arts Society, and the Lahaina Heritage Museum. Exhibits take you back through Lahaina’s colorful history. Here you can also pick up a self-guided tour brochure to help you find the many fascinating historical sites throughout Lahaina.

One of those sites you won’t want to miss is the Baldwin Home Museum. Restored to its 19th century splendor, this beautiful home of missionary Dr. Dwight Baldwin, was constructed in 1834 from coral and stone.

An unusual site that is a must-see is the Hauola Stone. Considered to be the most sacred artifact on Maui, this stone sits just on the shoreline near the Lahaina Harbor, where saltwater and freshwater meet.

Shaped somewhat like a short-backed chair, it is here that many members of Hawaiian royalty were born. Every woman of royal blood was required to give birth on this ancient and most spiritual stone.

This stone was also thought to have healing powers. Thus the name translates to mean “extending life and health.”

The Lahaina Harbor has seen it all, from King Kamehamea’s fleet of 800 koa wood canoes to fleets of Boston whalers, from Chinese trading ships to the U.S. Navy, Here today you can view numerous pleasure craft including beautiful yachts, and even catch ferries to visit other islands in the Hawaiian chain.

About the Author
Alice Perkins

Alice Perkins is a timeshare travel blogger for RedWeek.com, the largest online market place for timeshare rentals, where vacationers can find luxury accommodations for less than the cost of a typical hotel room.