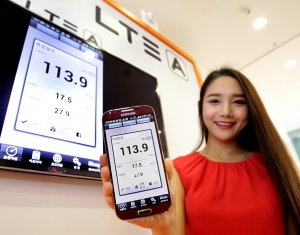 Korean operator SK Telecom at an event today finally welcomed the world’s first LTE-Advanced network. The network will offer speed of up to 150Mbps and as of now went live in Seoul and two other cities. The company says that the network is double the speed of its LTE service and is ten times faster than a regular 3G network.

If you want to download an 800 MB movie, it will take a mere less than a minute time – 43 seconds in total – but again it at the end depends on real-world conditions, says SK Telecom. Further, the company added that the network supports even faster speeds up to a theoretical maximum of 150Mbps down and 37.5Mbps up.

The service will be expanded to cover 82 cities nationwide, SK says, but has not given any timeframe yet.