Japan’s third-largest carrier and iPhone primary provider, SoftBank has announced that starting from February 24 after testing since November it will provide data communications services “SoftBank 4G” with a high speed of up to 110Mbps down the line – the first product in the line-up to use it will be the ULTRA WiFi 4G SoftBank 101Sl, a mobile Wi-Fi router from Seiko Instruments capable of 76Mbps download speeds. 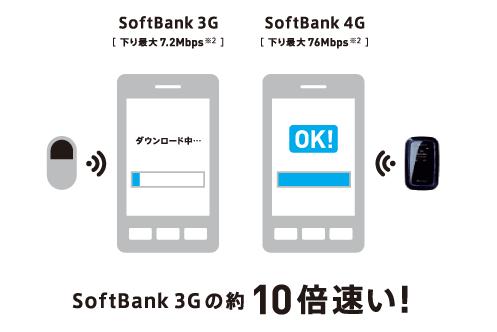 The service for the time-being will only be available in major cities at launch time, but the carrier overall aiming for 99 percent coverage by the end of the year – SoftBank’s network new entry means that 4G technology in Japan is now entered in more wider aspect with a new system called Advanced eXtended Global Platform (AXGP) competing against already-common 42Mbps HSPA+ networks, the NTT Docomo’s LTE service and KDDI’s WiMAX service.