A survey of 714 Japanese who either owned or were interested in portable gaming device, confirmed that their maximum interest is in PlayStation Vita gaming device. The survey was a private internet-based questionnaire that was conducted between 22nd and 26th December 2011 by the members of the CLUB BBQ, located in Japan. 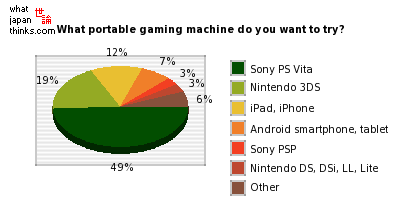 The reason the people mentioned on why their interest is in PlayStation Vita, popular answers were because it’s the latest leading-edge multi-function device, new functions such as the rear touch-panel and online games.

The PlayStation Vita, also known as “PSVita” or “PSV”) is a handheld game console by Sony Computer Entertainment. It is the successor to the PlayStation Portable as part of the PlayStation brand of gaming devices. It was released in Japan and parts of Asia on December 17, 2011 and is expected to be released in Europe, Australia, and North America in the month of February 2012.