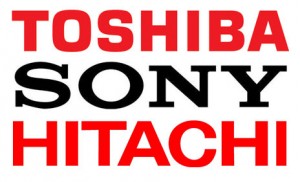 Japan Display, the organization formed by the merger between Sony, Toshiba, and Hitachi’s small and medium-sized touchscreen LCD manufacturing divisions a new firm that deals with middle- and small-size displays, started operations April 1, 2012. The establishment of the company was announced Aug 31, 2011, and a formal contract was signed in November 2011. Each of the manufacturers has a 10 percent stake in the new firm, with the remaining 70 percent held by the largely government-funded Innovation Network Corporation of Japan (INCJ).

The number of employees of Japan Display is currently about 6,200. At a press conference that the company organized for announcing its establishment Aug 31, 2011, it said that the number of employees was about 7,600 (as of April 1, 2011). So, it seems that more than 1,000 employees were cut mainly in the indirect and production departments after the agreement on the business integration. When asked if more employees will be cut, Otsuka said, “We are not planning to do that at this point.”