According to the report released yesterday, the United Nations agency, the International Telecommunication Union (ITU) has reported that South Korean topped a global list ranking countries on their ICT access level for the third time is a row ranked at no. 1 position in the ICT Development Index (IDI). Sweden ranked second, followed by Finland, Japan and United States. The Korea Communications Commission (KCC), in particular, had “effectively [regulated] a highly dynamic and competitive telecommunication market, and [pushed] forward innovations and improvements such as the deployment of LTE in 2011.” 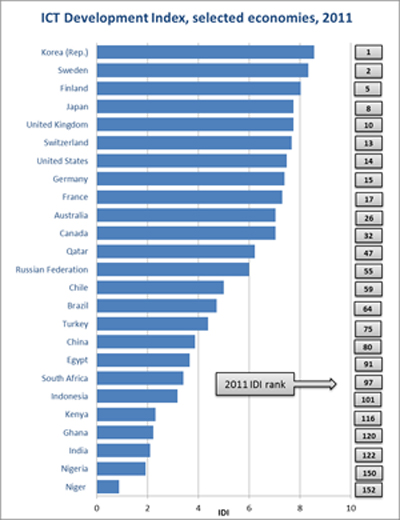 “The past year has seen continued and almost universal growth in ICT uptake. The surge in numbers of mobile-broadband subscriptions in developing countries has brought the Internet to a multitude of new users. But despite the downward trend, prices remain relatively high in many low-income countries. For mobile broadband to replicate the mobile-cellular miracle and bring more people from developing countries online, 3G network coverage has to be extended and prices have to go down even further,” said Brahima Sanou, Director of ITU’s Telecommunication Development Bureau, which produces the annual report.