Apple yesterday only announced the most awaited smartphone and the next instalment of iPhone, the iPhone 5, but since from the time, predictions and estimations work already started saying as well as suggesting on how much sales the iPhone 5 brings for Apple. According to market researcher IHS iSuppli, Apple is headed for a recorded quarter for iPhone sales. 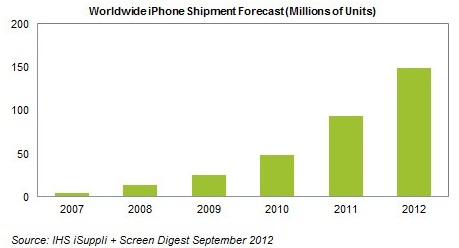 The fourth quarter will be huge, iSuppli said in a research note today. “Apple’s biggest quarter for iPhone sales in history.” The new iPhone will drive Apple’s smartphone shipments in 2012 to 149 million units, up 60 percent from 93 million in 2011. “The new phone will be released with just over a week left in the third quarter, so most of the iPhone 5 sales bump in 2012 will be seen in the final [fourth] quarter of the year,” iSuppli said.