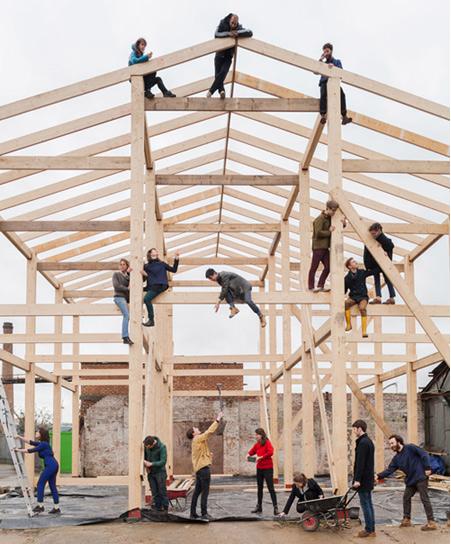 The Assemble works that have been nominated for the prize include the regeneration of the Granby Four Streets in Toxteth, Liverpool. This community-led regeneration of a variety of condemned terraced houses features a winter garden with glass roof and a crafts workshop area, for the training of crafts techniques to local residents. The Granby Four Streets project has renovated a number of typical two up, two down terraced properties; the installation for the Turner Prize will be a recreated model of one of these renovated houses, with the interior incorporating a variety of crafts that have been fabricated by Toxteth locals from the local crafts workshop.

Some of the crafts on display by the Toxteth Workshop group include mantelpieces and lamp stands fabricated from builders’ waste and pendant lamps made from reclaimed terracotta tiles. All products on display in the house will be for sale and profits are to be donated to the Granby Youth Workshops.

The Assemble Collective does not see any problem with the fact their architecture has been nominated for an arts prize as they feel it is not appropriate to use “labels” as descriptors for any of their building projects. They rely upon the self-help ethos with an emphasis upon social commitment and feel that labelling the house renovations as buildings and the crafts workshop fabrications misses the whole point of the project.

Some upcoming projects Assemble are getting involved in include art at the Seven Sisters Underground station and the creation of an out of doors performance space in Hounslow. All members of Assemble feel their architecture is very similar to artwork in that the designs emerge as a result of their constant conversations and interactions. Winning the Turner Prize would bring the collective’s work into the eye of the public and they hope will widen their appeal and the popularity of the social architecture they produce.

This year’s nominations are a diverse group of artworks. The other nominations for the Turner Prize 2015 include Janice Kerbel who has produced a musical piece for six voices, Nicole Wermer who is providing a room of tubular chairs with fur coat attachments and Bonnie Camplin who has produced an archive of books and leaflets across a variety of topic areas.

All of the shortlisted projects are on display at the Glasgow Tramway Art Centre until 17 January 2016 and the winner will be announced in December 2015.

About the Author
Tim Aldiss

Tim Aldiss writes for OSC - faster fasteners for the trade.