With rumors surrounded out loudly that Apple to launch iPad Mini on October 23 at an invite-only event with Apple already ordered 10 million units from suppliers for this quarter, the pricing and configuration of the device is allegedly appearing in the Apple system. According to an inventory system screenshot obtained by MobileGeeks, the iPad Mini will come in sixteen different memory and wireless configurations. Prices of the new device will starts at 249 Euros ($322.60) for a Wi-Fi-only 8 GB iPad Mini, while other on offer chart includes 16GB, 32GB, and 64GB. The highest version i.e. 64GB version comes at a price of about $650, with 4G LTE capability. 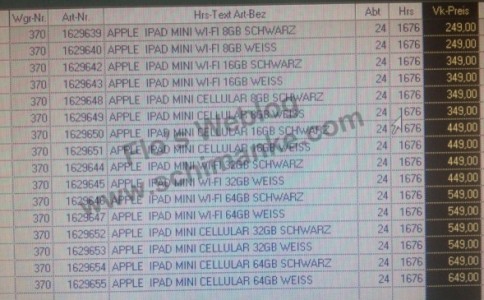