Note: Thanks Nina Koo-Seen-Lin from Verve Search Ltd for sharing this beautiful map.

“I pity them greatly, but I must be mum, for how could we do without sugar and rum?” William Cowper, English Poet

Can you imagine a world without the sweet, swashbuckling taste of rum? Imagine, if you can, a world with tales of well-behaved pirates sedately sailing the high seas. There’d be no cause for Jack Sparrow’s signature camp and drunken swagger in Pirates of the Caribbean and that memorable line: “But is the rum gone?!” Summer days would be so much less flavoursome; a world without mojitos and planters punch cocktails? Inconceivable!

Rum makes things more fun. There’s no denying that. Sailors drank it with slices of lime to keep their spirits up and scurvy at bay. Admiral Nelson was such a fan of the stuff that rumour has it he requested his body be pickled in the stuff when transported back to England. Sailors kept taking a sip of the stuff to bring them good luck. To this day, rum is often nicknamed ‘Nelson’s Blood’.

Rum is not only a tasty treat but it can also provide you with some health benefits by lowering blood pressure, aids in relieving stress and aids in relaxation. All in moderation of course! Studies have shown that drinking rum lowers the risk of developing Alzheimer’s, dementia, diabetes, heart disease and cancer of the kidneys. With such benefits to our health and general happiness, it’s no wonder there’s a national day dedicated to rum (mark 16 August in your diaries, readers).

The Caribbean is without a doubt the central hub of all rum production in the world. Almost every island has one distillery and the majority are still in working order today. Each Caribbean island produces its own rum style and rumaficionados make it their mission to sample them all.

Before you start pouring, it helps to know a little bit of history about the rums and the distilleries they come from. Thankfully there’s a handy interactive map for that. Produced by Coconut Bay Resort, a retreat in St Lucia that caters for couples and families, the map pinpoints the location of each distillery with a potted history of the production, the rums they produce, quirky facts and information on tours.If you’re thinking of visiting the Caribbean or taking a rum tour, this map is a great starting guide. SO, on that note, there’s nothing left to say except, “yohoho, and a bottle of rum!” 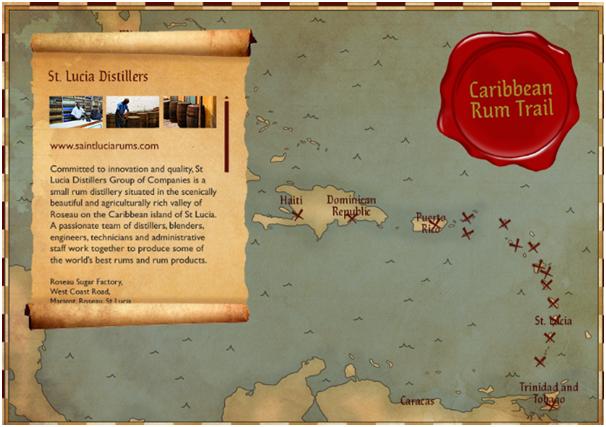