Intel Corporation has just announced its second quarter result with revenue of $13.5 billion, operating income of $3.8 billion, net income of $2.8 billion and EPS of $0.54. The company generated approximately $4.7 billion in cash from operations, paid dividends of $1.1 billion and used $1.1 billion to repurchase stock.

“The second quarter was highlighted by solid execution with continued strength in the data center and multiple product introductions in Ultrabooks and smartphones,” said Paul Otellini, Intel president and CEO.

“As we enter the third quarter, our growth will be slower than we anticipated due to a more challenging macroeconomic environment. With a rich mix of Ultrabook and Intel-based tablet and phone introductions in the second half, combined with the long-term investments we’re making in our product and manufacturing areas, we are well positioned for this year and beyond.” 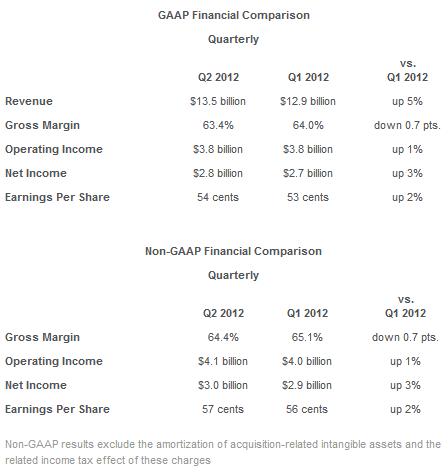