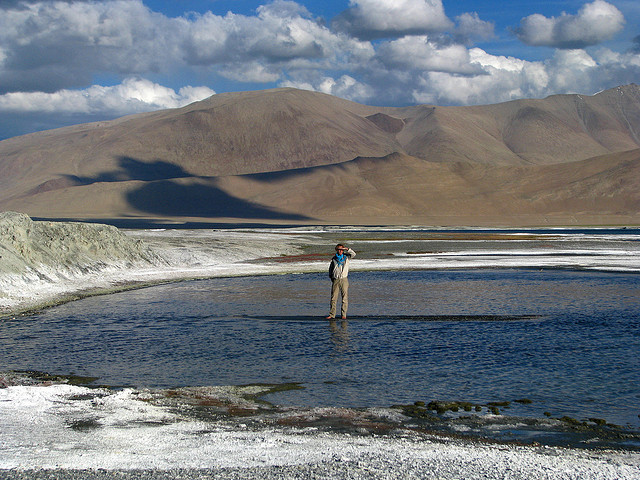 India is known for its legendary diversity of terrain that it traverses. It is a land of snow-clad peaks, lush forests, tempestuous rivers, unspoiled beaches, deserts and thousands of miles of coastline. What more could any tourist ask for? For nature enthusiasts, the country offers an exciting holiday experience among towering mountains, serene white vistas and beautiful flowing rivers. With pristine beauty, one such dream destination is Nubra valley where people can explore more of adventure, wilderness, nature, culture and landscape. Called by some as the “The Last Shangri-La” Nubra Valley remains to be a wonderful still untouched land.

The picturesque Nubra valley lies almost 150 km north of Leh.  From Leh the journey to an unknown wonderland starts. Previously known as Ldumra (the valley of flowers), Nubra valley can be reached through Khardung-la, the highest motorable highway in the world. To access this valley, the tourists are required to cross the small bridge, built across the ShyokRiver and need an Inner Line Permit which can be easily obtained from DC office in Leh district. As per this permit, the maximum length of stay in the valley is just seven days for the tourists.

Nubra is a tri-armed valley which lies almost 3048 meters or 10,000 ft above sea level. With scarce vegetation and rare precipitation, this high altitude cold desert is mainly inhabited by Nubra skat speakers or Nubra dialect. Most of them are Buddhists. In the lower altitude of valley, along the Shyok River, inhabits the Balti of Gilgit-Baltistan and Sufia Nurbakhshia and Shia Muslims.

Ladakh is a land to several beautiful rivers and lakes. Along the SiachanRiver or Nubra lie the villages of Kyagar, Sumur, Panamik, Tirith, Turtuk and many more. The villages are fertile and are irrigated with a variety of fruits, nuts and crops such as wheat, mustard, barley, peas, walnuts, blood apples, apricots and almond trees. Buddhist monasteries are the major attractions in this area. Between Sumur and Kyagar villages lay the Samstanling monastery and Panamik is well-known for its hot springs. There is an isolated Ensa Monastery at Panamik, across the SiachanRiver or Nubra. Monasteries of Ansa, Diskit, Sumur, Keyger and Hunder reflect rich culture of Mahayana Buddhism.

Nestled on the rim of a desert on the Shyok River-side valley is the main village, Diskit. It is the administrative center of the valley and is a home to significantly sited Diskit Gompa. These Gompas or Monasteries have long walls made of prayer or Mani stones adorned with Buddhist prayers. The roads are lined with white Buddhist stupas and huge prayer wheels in the most unanticipated places. Close to Diskit are white sand dunes where tourists can enjoy Bactrian camel ride. It is undoubtedly one of the best treasures of this planet, breathing in pure isolation in the heart of the Great Himalayas.

Baigdandu is another beautiful village positioned in this area. The people of this village are marked with rosy cheeks, auburn hair, and startling blue eyes as against the typical features of Ladakhis. The village is also known for goats from which pashmina is obtained for shawls. In the seventeenth century, Hunder was the capital of Nubra district and is a home to Chamba monastery. Also known as land of sand dunes, Hunder was stuffed with children and apricot trees. Until 2010, the Nubra valley was accessible for tourists till Hunder. The tourists can enjoy greener expanse of Ladakh beyond this village due to its lower altitude. A virgin destination which was still unnoticeable by many people till 2010 is the village of Turtuk. It is in fact a haven for people who seek tranquility and communication with the tribal people of Ladakh. With eco-friendly infrastructure, Turtuk offers peaceful camping sites for the tourists.

Though the main access to Nubra valley, Khardung La pass is open all through the year, there is an alternative route, east of Khardung La that crosses Wari La and links to the main Nubra highway system via Khalsar and Agham along the ShyokRiver. From the Indus valley, the tourists can also use trekkable passes at various points. The best time to visit this splendid valley is from May to October. With delightfully hospitable inhabitants and spectacular views, Nubra is an awesome experience.

Since Nubra is a high-altitude cold valley, it is advisable to carry enough water as one can suffer from nausea and severe headache with the increase in altitude. The tourists are also required to take a mechanic as no mechanics and workshops can be found till Diskit. As the roads are grubby and it can be freezing cold at some places, carrying raincoats, boots and gloves can be very helpful. Avoid riding after sunset because the highway is slippery and narrow and can cause severe injuries.