According to the latest figures from IDC, the worldwide PC shipments totaled 73.6 million units in the first quarter of 2013, down -13.9% on comparing to the same quarter a year ago. Not only has this, but also a forecast decline of -7.7%, which will make the fourth consecutive quarter of year-on-year shipment declines. 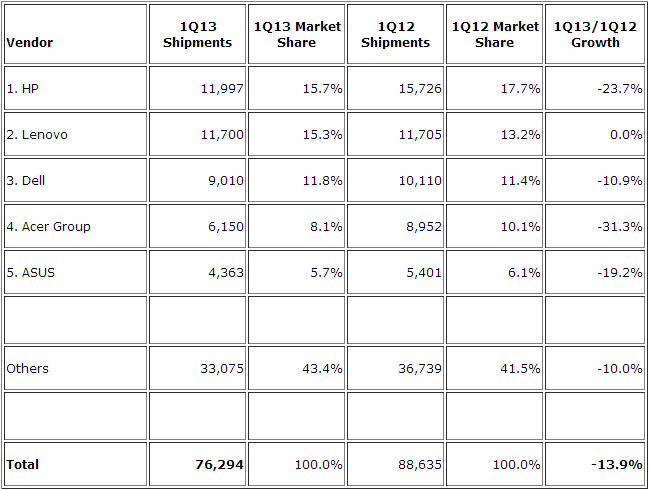 “At this point, unfortunately, it seems clear that the Windows 8 launch not only failed to provide a positive boost to the PC market, but appears to have slowed the market,” said Bob O’Donnell, IDC Program Vice President, Clients and Displays.

“While some consumers appreciate the new form factors and touch capabilities of Windows 8, the radical changes to the UI, removal of the familiar Start button, and the costs associated with touch have made PCs a less attractive alternative to dedicated tablets and other competitive devices. Microsoft will have to make some very tough decisions moving forward if it wants to help reinvigorate the PC market.”

Counting on vendors making total shipments, HP still top the chart, but posted a double-digit shipments decline with over -23% declines in shipments year-on-year in 1Q13. Lenovo stands on second position while Dell saw shipments decline by more than -10% globally. Acer experience a slight rose in its market share to 8.1% in 1Q12 from 8.0% in 4Q12 while Asus managed to have some growth in the US.