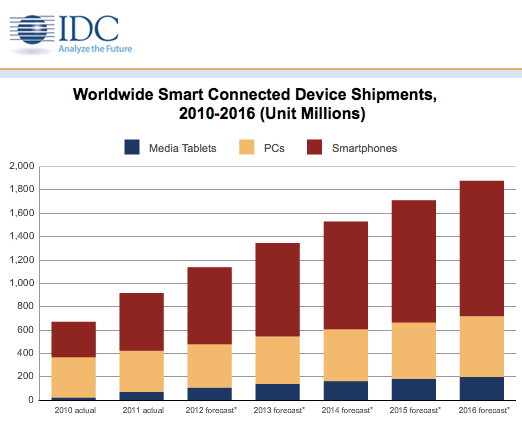 “Whether it’s consumers looking for a phone that can tap into several robust ‘app’ ecosystems, businesses looking at deploying tablet devices into their environments, or educational institutions working to update their school’s computer labs, smart, connected, compute-capable devices are playing an increasingly important role in nearly every individual’s life,” said Bob O’Donnell, vice president, Clients and Displays at IDC.

“Smartphone growth will be driven by Asia/Pacific countries, especially China, where mobile operators are subsidizing the purchase of 3G smartphones, thus increasing the total addressable market. In many if not all instances, the smartphone will be the primary connection to the Internet,” said Will Stofega, program director, Mobile Phone Technologies and Trends. “In countries where devices are not subsidized by the mobile operators, competitive and component-based pricing will help drive volume.”