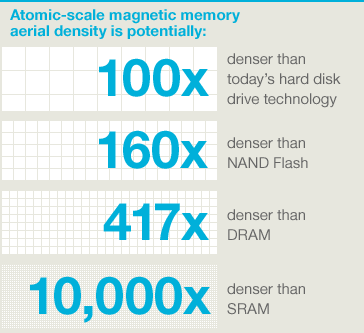 IBM Research demonstrated first of its type, world’s smallest memory bit, using only 12 atoms. IBM’s “Atomic-scale magnetic memory”, is said to achieve storage that is 100 times denser than today’s hard disk, which will stores one bit of data in about 1 million atoms.

Punctuating 30 years of nanotechnology research, IBM Research scientists have demonstrated the ability to store information in as few as 12 magnetic atoms. Being able to increase the data density of devices means more storage in a small space, storage that is 100 times denser than today’s hard disk drives, 150 times more dense than solid-state memory.

IBM said that, it can deliver a storage environment that is significantly smaller than today’s hard drives, which use about one million atoms to store a single bit of information. The research would lead to the vital understanding necessary to build smaller, faster and more energy efficient devices, company added.

IBM also mentioned that we expect our hard drives to store more and cost less every few years. But as of now with current conventions, the technology industry is reaching the physical limits of its adherence to Moore’s Law, according to which the number of transistors on a microchip will approximately double every two years.

The company is aiming to produce much denser storage than you can buy today: it’s 417 times denser than traditional DRAM and some 10,000 times denser than SRAM, which means you’d have no problem dropping several terabytes of memory and cache into your computer of tomorrow.