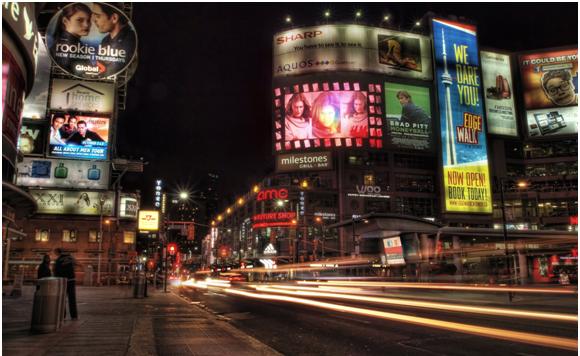 If you’ve been paying attention to the ever-changing landscape of advertising and marketing, then you’ll have noticed that commercial TV displays and digital signage are now dominating more and more of our public and corporate spaces. With more affordable technology and more user-friendly, customizable innovations, commercial television displays are becoming the standard means by which a company attracts, informs, and holds the attention of the consumer.

Businesses are beginning to realize the extensive opportunities before them, and are including digital signage on commercial television displays within and outside their own businesses, in the backseats and on the roofs of cabs, inside buses and trains, and in other public squares. Screens now broadcast information on college campuses, in government and administrative buildings (including hospitals and information centres), and throughout the halls of busy offices, all serving a variety of communication purposes. Many restaurants use digital signage to display menu items and include nutritional data (while also giving diners an animated visual of their food). Vending machine will soon join them in this practice. Negotiating a busy airport has never been easier—again, thanks to television displays. For both branding as well as advertising, it seems like a sure thing that digital signage is here to stay, and only growing in potential!

Over 40 agency, brand, and network presenters at the recent “Video Everywhere” summit in New York City (presented by the Digital Place Based Advertising Association) focused on strategies to exploit the high-growth digital-out-of-home (DOOH) sector for branding and advertising. Out-of-home refers to media viewed in public or corporate spaces while consumers are on the go.Knowing where your customers are, who they are, and saying the right things to make purchasing easy for them is a key to engagement and is facilitated with digital signage. During this event, a variety of media professionals addressed many different aspects of DOOH, including brand building, advertising, media and technology. Ads that seized the moment and that targeted consumers with information useful for purchasing were important concepts discussed.

As stated, DOOH can reach consumers in bars and cafes, restaurants, health clubs, arenas, gas stations, convenience stores and other public places. As an example of just how powerful this form of messaging can be, all we have to do is take a look at how well it’s succeeded in an unlikely place: the gas station! According to Nielsen, fifty-two million customers view gas station television screens each month. It has a larger reach than prime-time television, reaching 1,100 stations across the United States. The audience includes 76 percent of adults between the ages of 18 and 49 with a medium age of 40 and a median household income of $70,000. Nielsen claims that 89 percent of consumers are engaged watching gas station TV and 88 percent enjoy it because they have nothing else to do while waiting for a fill-up.

Your business or organization can hire another group to design custom content for you, or you can design things independently, using basic computers, tablets, and smartphones. Messages can be controlled and updated through a content media player or via cloud-based technology. Your message can be included at intervals along with other companies through a large network, sharing space and alternating advertisements. And commercial television displays come in a variety of sizes and display types, including 2D, 3D, and even motion-triggered or timed systems. Sound intriguing? Simply head to www.toshiba.ca/Business/Commercial_Displays/ to get a sense of the wide range of options available and to start becoming versed in some top-of-the-line products.

Using digital technology to engage consumers with content is a smart decision for all businesses that want to stay competitive, increase their brand value and sales, and cultivate a loyal customer base. And with more choice, tools, cost-effective solutions, the decision to embrace DOOH screens is easier than ever.