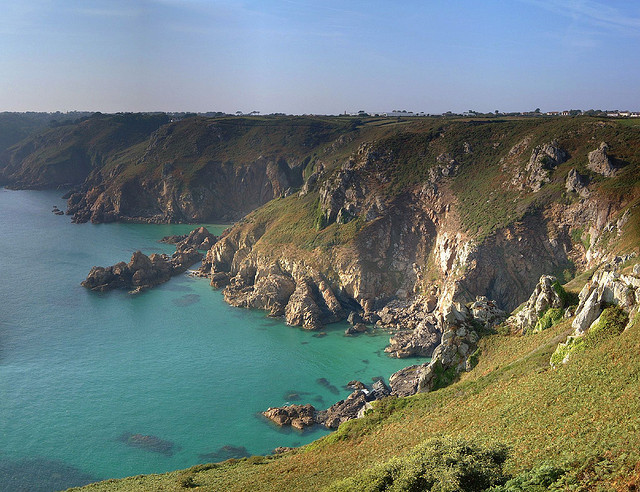 Guernsey is an island of 26 square miles, situated in the English Channel between England and France. The island’s location and mixture of French and English culture made it the perfect getaway for the famed French novelist Victor Hugo. Exiled from France in 1851 for declaring Napoleon III a traitor to the country, Hugo relocated firstly to Brussels and then onto the neighboring island of Jersey before finally settling in Guernsey in 1855.

Victor Hugo lived with his family at Hauteville House in the island’s capital of Saint Peter Port, and it was here that he wrote some of his most famous works during his stay in Guernsey, including the world famous Les Miserables, as we as Toilers of the Sea, which he dedicated to the island itself.

After his return to Paris in 1970, the house remained a family possession until 1927 when Victor’s descendants donated the residence to the City of Paris. The city restored the house to the layout and decoration that would have been in place during Victor’s residency. Additionally Hauteville House now houses an honorary consul to the French embassy in London, but its main function is that of the Victor Hugo museum.

Only guided tours are offered by the museumin order to preserve the condition of the house and the tours are available in both English and French given the number of French tourists that visit looking to pay their respect to one of their national heroes.I somewhat unsurprisingly chose the English speaking option as our tour group spent the next hour winding our way through the lavishly decorated rooms of the house, soaking in all of the stories of Victor’s time on the island, as well as the spectacular views over St Peter Port, which were available from both his writing room and his roof top conservatory.

Interestingly, our tour guide told us not only the story of Hugo’s time spent in the house but also of his love for the rest of the island; in particular of his swims in the nearby Havelet Bay to refresh himself on a hot summer’s day, his favourite walk along the coast starting from his town centre home down to the nearby Fermain Bay, or when he would stroll further on down to the beauty spot of Moulin Huet bay in order to garner inspiration for his works.

A man loyal to his country throughout however, Victor Hugo’s time on the island came to an end with the fall of Napoleon III and his Second French Empire. With his exile rescinded Victor returned to his beloved Paris to continue his political career and carry out what he considered were his duties owed to France up until his death from pneumonia in 1885.

Victor Hugo undoubtedly left behind an abundance of cultural riches on the island that he had grown so fond of. For anybody out there looking for a cultural holiday, or if you are a fan of Hugo or literature then I implore you to come and spend some time in the home, shoes and mind frame of the great novelist himself.

With a statue of Hugo set in the public gardens, his home now preserved as a museum, his homage to the island in Toilers of the Sea as well as the lasting effects of his legacy, to me at least, the island can deservedly be known as Victor Hugo’s Guernsey.

About the Author
Emma Williams

Emma is an avid traveller and loves visiting quirky places. She works to travel and loves to spend as much time discovering new places as possible. Check out her blog at www.travelbagel.com.