Google today updated the Google Translate for Android app, letting interpret sixteen additional languages by camera as well as adding phrasebook. You can download the latest version via Google Play.

This comes in addition with Czech, Dutch, English, French, German, Italian, Polish, Portuguese, Russian, Spanish, and Turkish, which being already supported since from the time it was having its first release.

The phrasebook feature is available via Translate’s app menu while the service will automatically sync with your Google account, means any changes you make while on your phone, it will also be reflected on the Google Translate desktop site. 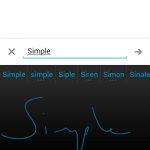