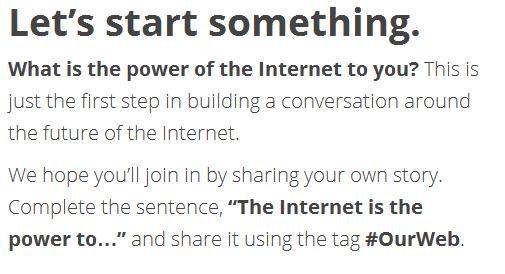 Google is always on with something and something and this time it has taken a step further asking the people around the world to “let’s start something” asking the world to describe the power of the internet. Google’s “Take Action” site went live in January as a way to draw attention to the SOPA blackout day, but it has just been updated with new content in which the company asks users to help build “a conversation around the future of the internet.”

To start that conversation off, Google is asking visitors to complete the sentence: “the internet is the power to…” and use the hashtag #OurWeb to share their stories. Google is providing quick links to its owns Google+ as well as that to Facebook and Twitter as well so that users can speak it out loudly on the social network of their choice.