Google from time-to-time beating on up to make its Android applications more design-centric – the search giant has been making waves up everytime in order to do better with the latest version of Android, Ice Cream Sandwich. Google is also beginning to offer more tools and help to developers to improve the look of their apps.

Last month also, the search giant launched an official Android Design portal that helps developers determine a better starting point of user experience. And, now, Google is launching design stencils on its new Android Design center. With the stencils you can now drag and drop the way you like to beautifully design Android applications with both ease and grace. 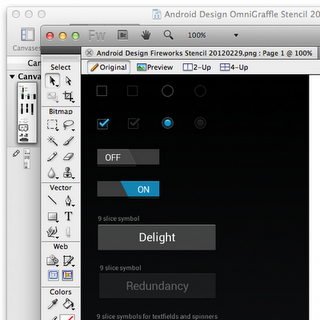 The stencils feature the rich typography, colors, interactive controls, and icons and are available for a host of design suites like Adobe Fireworks, Photoshop and Illustrator, as well as OmniGraffle. The details explained by Android designer Alex Faaborg:

With these stencils you can now drag and drop your way to beautifully designed Ice Cream Sandwich (Android 4.0) applications, with grace and ease. The stencils feature the rich typography, colors, interactive controls, and icons found throughout Ice Cream Sandwich, along with some phone and tablet outlines to frame your meticulously crafted creations.