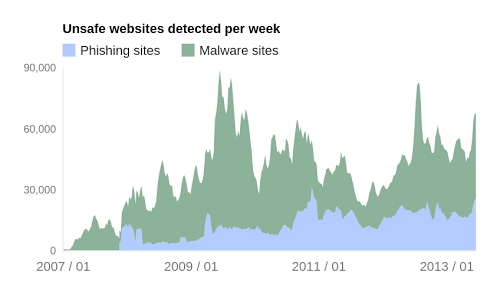 Google today announced that its Safe Browsing service has now protected a total of 1 billion Chrome, Firefox and Safari users, an up from 600 million users protected a year ago. In order to celebrate the milestone numbers, the search giant has launched a new section on its Transparency Report page shedding more light on the sources of malware and phishing attacks.

Also, in case if you don’t know what Google Safe Browsing is? then to tell that it’s a Google offering which provides lists of URLs which contains malware and phishing content to different browsers and ISPs. The company in any given day examines billions of URLs and found thousands of new unsafe websites, which results in putting up warnings on all the three browsers as well as a warning on Google Search.