Google Maps for Android sees million of people on daily basis, for free, voice-guided GPS navigation to guide them to their destination. So far, Navigation on Google Maps for Android has provided 50 billion kilometers of turn-by-turn directions, the equivalent of 130,000 trips to the moon, 334 trips to the sun, 10 trips to Neptune or 0.005 light years. The search giant released Google Maps 6.5 for Android in which the company’s Google Maps team redesigned the Navigation home screen in Android 4.0+ to make it easier to enter a new destination or select from recent and favorite locations by swiping left or right. 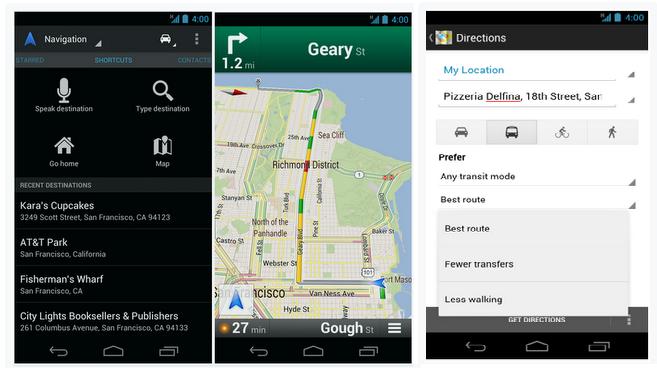 If your device has a high pixel density screen, such as those on Galaxy Nexus, Galaxy S II, Droid Razr and others, you’ll now get higher resolution map tiles that take better advantage of the pixels-per-inch on your screen. The result is a crisper, less cluttered map that is easier to read. Also, the new released version lets you choose to prioritize a particular transit mode (such as the bus or subway) and route option (like taking the recommended route, one with fewer transfers or one with less walking). Transit directions and schedules are available for 475 cities around the world.