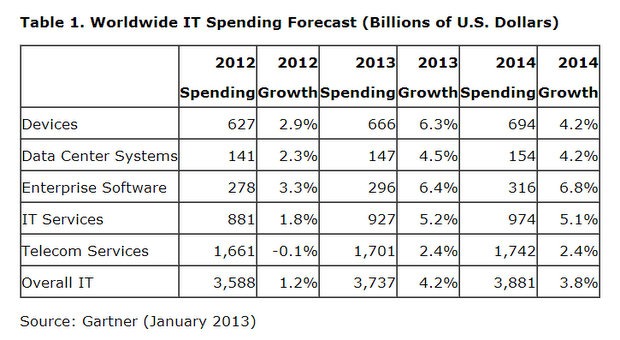 With entered in New Year, the big numbers turning up rounds and making even a more big that one can imagine, latest to add Gartner upgraded 2013 IT spending to total $3.7 trillion for the year, a 4.2 percent increase from 2012 spending of $3.6 trillion. According to research firm, the increase in spending is due to the result from projected gains in the value of foreign currencies versus that of the dollars.

“Uncertainties surrounding prospects for an upturn in global economic growth are the major retardants to IT growth,” said Richard Gordon, managing vice president at Gartner. “This uncertainty has caused the pessimistic business and consumer sentiment throughout the world. However, much of this uncertainty is nearing resolution, and as it does, we look for accelerated spending growth in 2013 compared to 2012.”

Here is what the reports say:

Worldwide devices spending which includes PCs, tablets, mobile phones and printers, is forecast to reach $666 billion in 2013, up 6.3 percent from 2012 (see Table 1). However, this is a significant reduction in the outlook for 2013 compared with Gartner’s previous forecast of $706 billion in worldwide devices and 7.9 percent growth. The long-term forecast for worldwide spending on devices has been reduced as well, with growth from 2012 through 2016 now expected to average 4.5 percent annually in current U.S. dollars (down from 6.4 percent) and 5.1 percent annually in constant dollars (down from 7.4 percent). These reductions reflect a sharp reduction in the forecast growth in spending on PCs and tablets that is only partially offset by marginal increases in forecast growth in spending on mobile phones and printers.