According to the latest report by Gartner, PC shipments in Western Europe totalled 13.6 million units in the second quarter of 2012, a 2.4 percent decline compared with the equivalent period of 2011. Mobile PC shipments grew 4 percent, while desk-based PC shipments saw a decline of 12.8 percent. The professional PC market declined 5.3 percent, while the consumer PC market was almost flat, with 0.4 percent growth. HP holds the no. 1 position in the Western Europe PC market, while Acer put in a strong performance with having its market share by 2.7 percent, resulting in retaining no 2 position. Asus had the best performance among the top five vendors and moved up to No. 3. 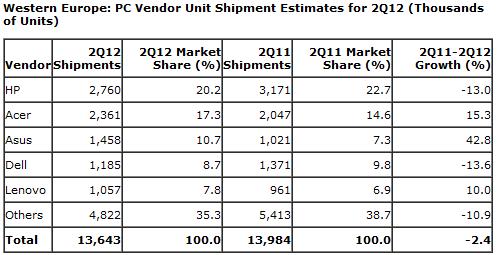 In the second quarter of 2012 the U.K. PC shipments totaled 2.5 million units, a decline of 7.6 percent compared with the equivalent period in 2011 with Dell suffered the biggest fall (23.2 percent), with its consumer business recording a decline of nearly 40 percent. HP again here too retained the no. 1 position, but still held less than 20 percent of the U.K. market.  Acer continued to lose market share. Toshiba exhibited the highest growth, albeit following a very weak second quarter of 2011. 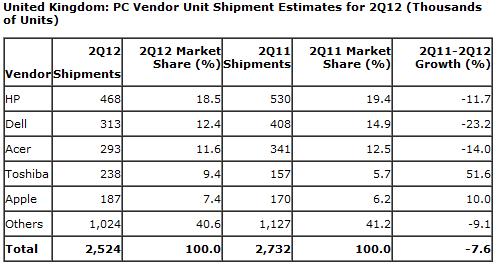 PC shipments in France totaled 2.5 million units in the second quarter of 2012, an increase of 0.7 percent compared with the same period in 2011. The mobile PC market accounted for 66 percent of total PC shipments in France, with volumes increasing 4.5 percent. Desk-based PCs declined 6 percent year-on-year. 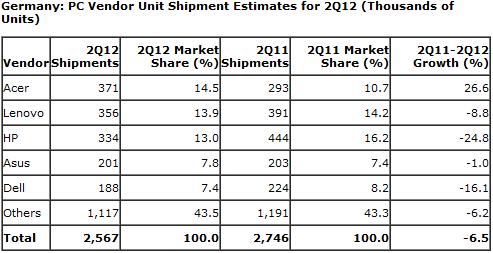