Gartner and IDC both estimates that the PC shipments in Q2 get flattened. The researchers at Gartner says the worldwide PC shipments totalled 87.5 million units in the second quarter of 2012, a decline of 0.1 percent from same quarter previous year while IDC also comes with same conclusion with saying that results are even slightly below IDC’s May projections of 2.1% year-on-year growth, but in-line with projections of a slow second and third quarter.

HP tops the chat in worldwide PC shipments, it accounts for 14.9 percent of the market, but its global shipments declined 12.1 percent. While Lenovo’s shipment growth continued to exceed the worldwide average, as its aggressive expansion damaged its competitor’s performance, namely HP and Dell, by taking shares from them. 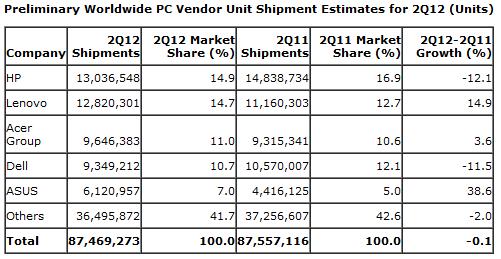 Acer this time able to manage to increase shipments as compared to a year ago and Dell has been in a process of transforming itself from a PC supplier to solution provider for professional markets. ASUS showed the strongest growth among the top 5 vendors worldwide, as its shipments increased 38.6 percent in the second quarter of 2012.