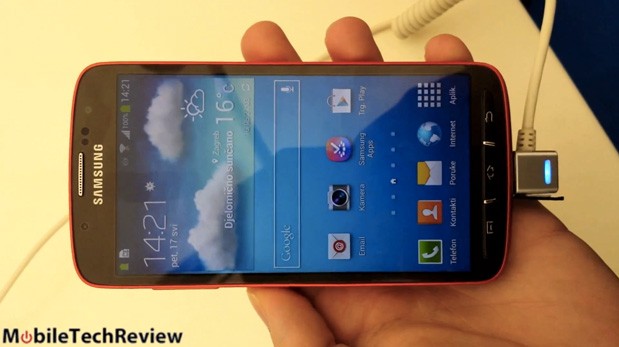 Two days, two leaks and both suggest one single thing that rugged Galaxy S4 Active is real. First the device model number come into picture, and then followed by pictures, now the device has been caught on film. MobileTechReview citing Matija (via Engadget) revealed that it has received some photos of Samsung’s upcoming Galaxy S4 Active Android Smartphone.

Even the publication source holding the device in his hands on it and on discussing over the specs, the device features dual core Snapdragon S4 Plus CPU and an 8-megapixel rear camera, while the rest of specs are the same. So, this means, the specs we have now with us along with above mentioned includes a quad-core 1.9GHz processor with Adreno 320 GPU, Snapdragon 600 chipset, 5.0-inch 1080p screen, and an 8-megapixel camera.

If the MobileTechReview information is correct, then without a doubt, the device going to make another big story for Samsung. Well, more information to follow, stay tuned with us.