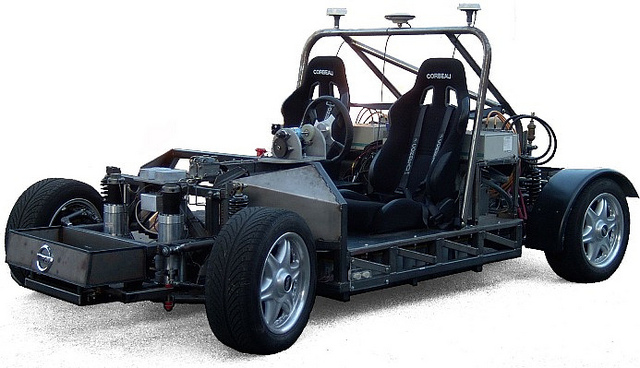 Future technology is often synonymous with the notion of intricate looking automobiles, equipped with every gadget under the sun – it is a preference of many inventors and innovators and a trend only exacerbated by film and TV (I’m looking at you James Bond). For as long as I can remember people have been trying to develop futuristic car technologies. This obsession actually has its roots as far back as the 1900s. It only takes a quick glance at old artist renditions of the future to know that vehicles were always of primary interest.

It is funny in hindsight, in these images, despite all the hypothetical technological advancements fashion remains generally unaffected.But are the concepts as far-fetched as first impressions would have us believe? Recent breakthroughs in auto technology have had me reconsidering my cynical outlook. Here are just a few of those breakthrough.

Ford is currently developing the technology to get out of your car and press a button which enables the vehicle to park itself. This technology has been called ‘Fully Assisted Parking Aid’ and is currently in the prototype stage. It would completely eliminate the problems that many people have with parallel parking, a skill especially useful in busy crowded cities. It also eliminates problem of having to pay insurance for parking related damage. There are already some of these cars on the market, but they are met with varying levels of success. Audi have even presented a car that can come and meet you after shopping using an app!

As a once frequent viewer of Knight Rider, this category filled me with no end of excitement. It seems as if science fiction is merging seamlessly with reality, as German-based Company ‘Sim TD’ is promising cars that will speak. This is not merely a gimmick either; it does serve a functional purpose – communicating with other cars on the road to warn the driver of collisions or congestion far beyond the scope of sight. It is not just cars that it will communicate with; it is also signs and traffic lights. It is predicted that this will be extremely useful in alleviating congestion and even preventing accidents!

It is a shift that is not embraced by everyone but it is almost perceived as inevitable. I imagine many people will despise the concept of having no real control. Brad Templeton, an advisor to Google’s engineers and innovators has come forward stating that in reality, “Humans are pretty bad drivers”, stating that 1.2 million people die from car accidents every year. The intention is to entirely eradicate the margin for human error. This are many that share this belief, Hans Hendricks vice president of advanced product development for Johnson Controls’ automotive electronics and interiors business – believes that “After 2025, the steering wheel will play a less dominant role in the interior”. He states that with fully autonomous vehicles there is no reason for drivers to be facing forward or to even require an instrument of control. Many experts are under the impression that we will see self –driving cars by the end of the decade.

As someone who consults for Less 4 Spares (provider of car accessories), I have personally witnessed these changes within the automotive landscape, I wouldn’t be surprised if those concepts we once thought as science fiction finally come into fruition. I am sure there is much I have missed – so please, if you have any more examples, or simply have an opinion about driverless cars – sound off in the comments section below…