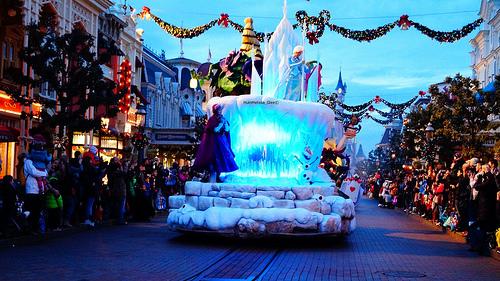 The monumental success of Frozen over the past two years has propelled the Disney empire to new financial heights.

Frozen is no longer just a stand-alone film, it’s now a franchise, and the recent confirmation that a sequel is in the works has only helped to boost Disney further, having also come on the back of the new Star Wars film being in production and the success of the Marvel series.
In just a few months from being released in late 2013, Frozen became the highest grossing animated film in history as it made in excess of $1.1 billion at the global box office. It also won the Oscar for Best Animated Feature and Best Original Song for Let It Go.

Coinciding with the success and growth of the Frozen franchise, Disney’s share price has also been on an upward curve. In the past two years, Disney’s stock has risen over 70 per cent in value.

When it was confirmed in March, at a Disney shareholders’ meeting in San Francisco, that a sequel would be made to Frozen, the share price went up by 4.2 per cent. The general upward trajectory has continued in the share price and it ensures that Disney remains a solid investment opportunity in the financial market.

Is it, therefore, a good time to be buying shares in Disney? There seems to be no immediate prospect on the horizon of Disney’s shares suffering an alarming dip given the ongoing success of Frozen and the other franchises in the company’s stable. With no release date yet scheduled for Frozen 2, the momentum is surely only going to build, so if you visit Tradefair you can find tips on how to trade in Disney shares.

Longer term, the share price is likely to be dictated by the success of Frozen 2. A short sequel called Frozen Fever has already been produced, but that seven-minute feature isn’t going to satisfy the audiences for long.

There is going to be immense pressure on the people behind Frozen 2 – the same people who were behind the original – to create another film which has such enduring mass appeal and, perhaps most importantly, the ability to keep drawing those same people back to the cinema.

That was one of the key draws of the first Frozen film – the ability to get the same audience going back to watch it again and again, not just the once as you would expect with many other films.

Replicating that attraction is going to be the biggest test as to how successful Frozen 2 will be. You are already going to be guaranteed the audience from the first film because people will want to know how the story develops, they will want to listen and learn the new songs, and see what happens to Elsa, Anna, Olaf and the others.

Arguably the husband-and-wife song-writing team of Robert Lopez and Kristen Anderson-Lopez are the ones facing the largest challenge in trying to find a song to match that of Let It Go, sung in the film by Idina Menzel, who plays Elsa. There were other songs in the original as well which are easy for kids to sing along to, and so they are going to have to compose comparable tunes.

If they can get that element right, then the rest of the film should fall into place and ensure that Frozen 2 has the potential to surpass the original in terms of its success at the box office. But sequels to such popular films are notoriously tricky to get right.

However, something would have to go drastically wrong for Frozen 2 to be a flop and you can only envisage Disney’s share price continuing to soar for the next few years.