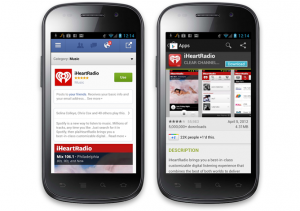 Facebook earlier quietly launched a new feature dubbed as “find friends nearby” which will locates neighboring social giant users with geolocation and displays them in a list. The Next Web is reporting that Charles Sankowich, CEO of Friendthem claimed that the social giant steal their idea and “trademark material.” Here’s a statement the publication received from him:

I was amazed on Sunday to read that Facebook is blatantly stealing our idea with what they are calling, “Find Friends Nearby.”

Facebook engineer Ryan Patterson claims the feature was born at a hackathon as “Friendshake,” but we believe they simply stole trademarked materials of Friendthem.com.

More than two years ago we trademarked “Friendthem” and have had tremendous success and exposure with this concept. Even their language is similar to what has been on our website for year’s now – “Friendthem is a location-based mobile app designed to help you make connections with people near you. Use the Friendthem app to follow up on missed connections for work and personal.

We are consulting attorneys and assuming this is true and expect to commence a lawsuit very shortly. One would think that Facebook would have learned to play fair after being through the mud previously with legal difficulties, but now they are doing it again.

We may not be billionaires but we are damn tough New York entrepreneurs, and we believe in this idea and will keep working to connect people.

Now, interesting is that FB engineer, Ryan Patterson, calling himself as the creator of the feature, responded in the comments on TechCrunch wall:

I built Find Friends Nearby with another engineer for a hackathon project. While it was originally called ‘Friendshake’, we settled on ‘Find Friends Nearby’ for launch (the URL was a little bit of a homage to the previous iteration).

For me, the ideal use case for this product is the one where when you’re out with a group of people whom you’ve recently met and want to stay in contact with. Facebook search might be effective, or sharing your vanity addresses or business cards, but this tool provides a really easy way to exchange contact information with multiple people with minimal friction.

This is now going to be really interesting, who is right and who is saying false, we keep an eye on the matter. Stay tuned with us.