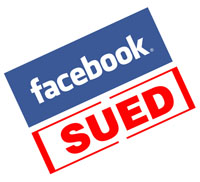 The latest to add in the “legal battles” the companies facing around the world, the world’s largest social networking site Facebook can now add a nationwide class action suit to its ever-growing lawsuit list – the lawsuit accuses Facebook of continuing to ignore concerns over tracking cookie.

Filed up by the two firms in the US District Court for the Northern District of California – the social giant back in September last year confirmed that user-information was being collected from third party sites, even also in the case when users logged out of their accounts.

Founding Partner of Murphy P.A, William Murphy Jr. said “The days when online service providers can run roughshod over the privacy rights of their customers are over. Companies that operate commercial websites, such as Facebook, need to realize the public is increasingly concerned about its privacy rights.

Perhaps even more importantly, there is a growing community of security experts and bloggers that is extremely savvy about internet technology and committed to ensuring that people’s privacy rights are respected and protected.”

“Facebook’s actions are in violation of the social network’s own privacy policy, which say that post-log-out activity is not tracked by Facebook,” Peter Angelos of the Baltimore-based law firm Murphy P.A and San Francisco-based law firm Girard Gibbs LLP stated.