According to an estimate from Gregory Lyons, iCrossing, if Facebook continues at the same rate, it will hit a billion users mark by August 2012. The company claimed that it has 800 million users in September, so it’s not surprising that the world’s largest social network achieve the billion marks. Using a process of linear regression on the data from the end of 2008 onwards we expect Facebook to hit a billion active users around August 2012. Looking at the data from 2006-mid 2008 it looks like Facebook was growing at an exponential rate, however more recent data suggests it’s growing in a linear fashion. 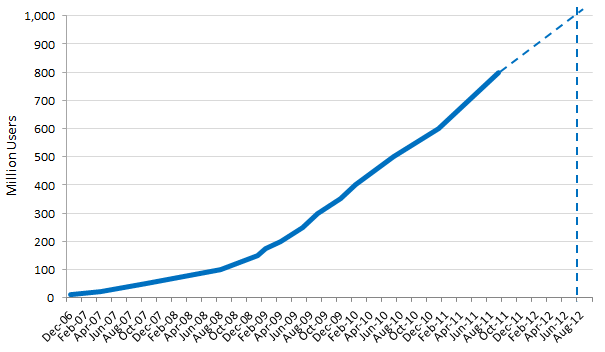 Facebook’s growth has slowed or stopped in many of its early adopting countries such as the US and the UK. However, developing countries such as India and Brazil have shown strong sign of growth, with Indian the number rose from 22 million users to 36 million and with Brazil, the number going from 13 million to 30 million in the last 9 months period. Lyons added in his blog. He also pointed that with only 3% of India’s population on Facebook and 16% of Brazil, countries such as these will clearly contribute heavily to the Facebook’s continued growth.