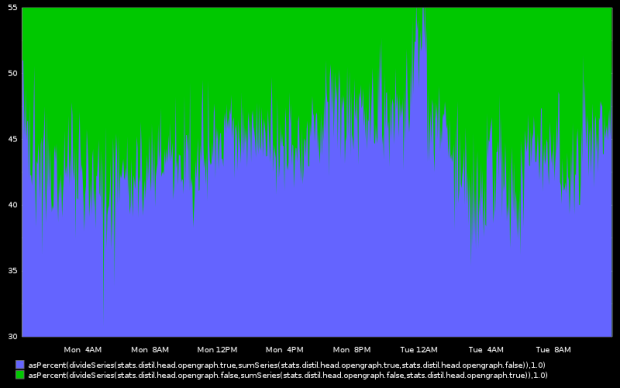 Embedly has something meaningful for you that lets you understand that how Facebook dominates the (social) Web. According to Embedly 42 percent of all URLs that the service processes have one or more Open Graph tags. The data comes from Embedly co-founder and CEO Sean Creeley says:

If you aren’t familiar with Open Graph, it’s the semantic metadata that Facebook introduced in 2010. Initially, it could only provide the title, image, and description for links and a few other objects, but it’s been extended to power pretty much every third-party application in the stream. Yes, the special sauce that allowed Viddy and SocialCam to amass millions of users in days is Open Graph.

Recently on Quora, we were asked how Open Graph had affected us. So we added a few variables to our Statsd/Graphite setup. In this graph, the purple region represents links we’ve crawled that provide Open Graph metadata as a percentage of all links.

Creeley responding on Quora by saying:

Yes. Open Graph makes it easier to gather data, but it’s not always the data you want. While Open Graph has a ton of different facets, we generally stick to image, video, audio and description so I’ll talk to those.

You need to look at it from a publisher’s side rather than a scraping side. The content placed in those tags are specifically designed to be used in Facebook. The images are generally 90px wide, the video generally is optimized for viewing in a 400px embed and the description is short. It’s perfect for Facebook’s use of the data, but for general purpose it’s very limiting.

The web is getting bigger; images, videos and descriptions. Could Flipboard or Pinterest solely use Open Graph? No, not really.

Embedding is also about user expectation. If there is a huge image in the middle of the page, yet the Open Graph tag is a default gif, it’s not a great experience.

Embedly uses Open Graph as a fall back. If we can’t find anything else in the page that is better, we will default back to Open Graph.