A time before the Italian cruise liner Costa Concordia’s tragic disaster, the waiter’s sister Patrizia Tievoli had posted on Facebook Friday, “In a short period of time the Concordia ship will pass very close. A big greeting to my brother who finally get to have holiday on landing in Savona.”

Corriere della Sera, Italian newspaper reports on this, saying that, “As the Concordia approached the coast of the island Giglio, ship Captain Francesco Schettino told the head waiter, a Giglio native, “Come and see Antonello, we’re right in front of Giglio.” 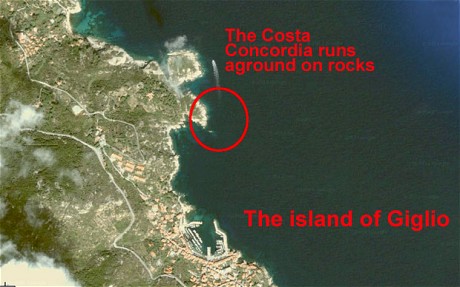 He misjudged the stunt, with the results that the ship hit the rocks, tearing a huge gash in its hull and forcing the night-time evacuation of its more than 4,000 passengers and crew on board. When the head waiter eventually reached dry land after the mass evacuation of the ship, he reportedly told friends and relatives on Giglio, “I would never imagine that I’d end up disembarking on my own island like this.”

Since the time the ship hit the rock, a Facebook page has been setup for those who wish to put their anger up on the Captain for doing such a massive disaster. The page that says Captain of the ship played with people’s lives was liked by 1000 people at that time.